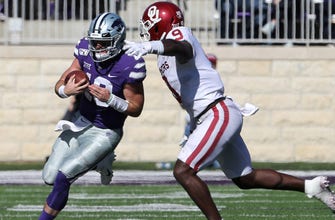 After the Sooners left Manhattan with a stunning loss that nearly cost them a shot at the College Football Playoff, there will be no such problem this year. Third-ranked Oklahoma will host the Wildcats on Saturday in the Big 12 opener for both teams.

“I think the concern stems from me turning on the film from a year ago and watching us get completely outplayed by that program,” Oklahoma defensive coordinator Alex Grinch said. “And so, it took all of one game to earn complete respect for that coaching staff and how they play.”

Oklahoma quarterback Spencer Rattler remembers how the Sooners fell behind by 18 points and rallied before losing 48-41.

“That was a tough game for us,” Rattler said. “We went in there, we didn’t execute on all the levels we wanted to but … so what, now what? We’ve got to move on, improve on what we had to improve on. And so we’re getting ready to get a shot at them again this year.”

“He does a great job of reading defenses, looking people off and knowing where he’s going with the football,” Klieman said. “He’s an extremely good athlete. They didn’t run him or need to run him much against Missouri State, but I know from doing some research that he can beat you with his feet as well as his arm. I know he’s a young player, but I’ve been so impressed with his skillset.”

Kansas State’s season got off to a rough start — Arkansas State scored with less than a minute remaining to shock the Wildcats two weeks ago. So as big an upset as last year’s win over Oklahoma was for Kansas State, doing it this year would be an even bigger surprise.

“They’re a really good football team, and we, after one game, showed that we have a long way to go, so that makes sense to me,” Klieman said. “You still have to line up and play. We have to not worry about who the opponent is, and we know who it is, and more focus on us getting better at all areas offensively and defensively.”

Kansas State quarterback Skylar Thompson suffered an undisclosed injury against Arkansas State, but Klieman said he should be available.

“He didn’t do anything last week other than rehab and things,” Klieman said. “He did practice yesterday, and I thought he felt really good. So, I’m confident that, with a week of practice, that he’ll be at full strength for Saturday.”

Thompson passed for 213 yards and rushed for four touchdowns in last year’s game against the Sooners.

Both teams nearly weren’t able to play their openers.

Oklahoma coach Lincoln Riley confirmed after the Missouri State game that the game was in jeopardy because of the team’s COVID-19 cases.

Klieman said Kansas State’s game against Arkansas State game was in doubt, too.

“It was Friday at five o’clock where we finally got the go ahead to play because we were one player at one position from having to cancel that game. And we’re not the only ones, there’s a lot of people.”

Oklahoma gained just 124 yards on 35 carries in the opener.

Riley said the offensive line should be getting closer to normal this week.

“Hope to have a few more options and guys available, and even the potential to play multiple guys throughout the game, which is something that when at full strength we’d like to be able to do,” he said. “Obviously that’s going to depend on week to week and how these guys perform and certainly how these COVID tests go.”

Klieman acknowledges that last year’s win over Oklahoma was significant, but he has been a winner for years — he won four national titles in five years at FCS power North Dakota State before taking over at Kansas State last season.

“It was obviously a big win because it was a home win, it was on Homecoming and those things,” he said. “I guess I don’t ever really look at that as far as where it ranks. I don’t have a tally on my wall or anything of where things are at. I kind of just play it year-by-year and game-by-game.”

Oklahoma’s defense has been criticized for years. For now, it ranks among the nation’s best.

That’s in part because the Sooners have only played one game — against FCS program Missouri State.

But numbers are numbers, and they look good so far for the Sooners under Grinch. The Sooners lead the nation in scoring defense and total defense, rank second in pass defense and are fourth in rushing defense.