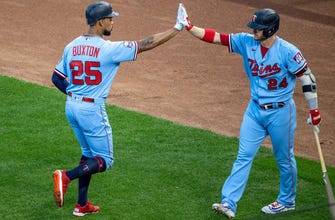 The word, which of course is Spanish for “bomb,” was coined by outfielder Eddie Rosario in a postgame interview last season and took on a life of its own as the Minnesota Twins shattered a Major League Baseball record with 307 home runs.

The encore performance in 2020 — albeit, in a shorter season — hasn’t been quite as inspiring, but the Bomba Squad has still mashed 91 home runs in 57 contests.

The Twins are tied with the New York Yankees for second in the American League in homers, right behind the rival Chicago White Sox (92). Mookie Betts and the Los Angeles Dodgers likely will take home the overall MLB dinger crown this season, as they’ve collected 108 home runs with three contests to play.

The taters have come in bunches. Minnesota has 15 games with 3+ home runs, second only to Cincinnati, the Twins’ opponent for the final three games of the regular season.

The Twins aim to keep a strong month of September rolling into the postseason. Minnesota is 15-6 (.714) this month, which is good for their second-best September winning percentage in franchise history. The 2003 squad, featuring the likes of Torii Hunter, Jacque Jones and Corey Koskie, went 19-7 (.731) in the final month to steal away the AL Central crown from Chicago.

Of course, the long ball has been essential in Minnesota’s late-season success. No AL team has mashed more home runs in September than the Twins (42). Byron Buxton has eight big flies in 15 starts in center field this month alone.

The Twins have allowed the fewest home runs in the big leagues — 59. That adds up to a +32 home run differential, which ranks fifth in franchise history even with the shortened season. Now, it’s not quite as impressive as Minnesota’s +109 home run differential last season, which finished as the second-best mark in history behind the 1927 Yankees.

As the Twins wrap up the 2020 regular-season campaign this weekend, the Bomba Squad will be put to the test. Cincinnati counters with Luis Castillo, who ranks fifth in the NL with a 0.68 HR/9, and Cy Young award candidate Trevor Bauer on Saturday and Sunday.

Get your home runs in against right-hander Tyler Mahle in the series-opener Friday.

— If the Twins finish the season with the same record as Chicago, the White Sox claim the division title. Chicago and Minnesota split the season head-to-head series 5-5, but the White Sox have the better division record. Chicago plays the Cubs this weekend.

— Jose Berrios, who will start Friday’s season-opener, has turned his season around. In his first five starts, Berrios was 1-3 with a 5.92 ERA. Opponents were batting .284 against him. However, in Berrios’ last six starts, he is 4-0 with a 2.14 ERA and .200 batting average against.

— Nick Castellanos has scored or driven in 24.1% of Cincinnati’s runs this season, ranking fifth in the National League. Atlanta’s Freddie Freeman is first (26.1%).

— Eddie Rosario has registered 23 homers in interleague play over the past five seasons, which is tied with Mike Trout and Jose Abreu for the most in the AL.