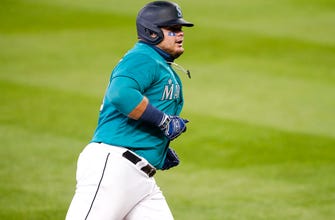 Looking for ways to get the offense going, the Milwaukee Brewers jettisoned their starting first baseman Thursday.

Veteran Justin Smoak, signed in the offseason, was designated for assignment while Daniel Vogelbach was acquired off waivers.

Vogelback was purchased by Toronto from Seattle on Aug. 24 and played in just two games, going 0-for-4 with a walk, before being waived. In 18 games with the Mariners this season, Vogelbach was 5-for-53 (.094) with 11 walks and two home runs.

Jedd Gyorko, who is hitting .261/.346/.609 with five homers in limited time, has started six games at first base and could be in line for more playing time. Logan Morrison and Ryon Healy are the only others to start at first for Milwaukee this season, although the team had intended Ryan Braun to man that position before the designated hitter was installed in the National League for the shortened 2020 season.

The Brewers open a three-game series at Cleveland on Friday with all the games being televised by FOX Sports Wisconsin.