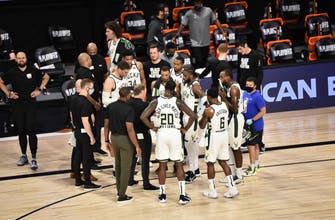 They’re waiting to see if reigning NBA MVP Giannis Antetokounmpo will join them.

It’s still a dire situation for the team that had the league’s best regular-season record this season — they’re down 3-1 in the Eastern Conference semifinals to the Miami Heat, with another win-or-go-home test awaiting in Game 5 on Tuesday night. And they don’t know if Antetokounmpo, who sprained his right ankle in Game 3 and then again in Game 4, will be ready.

“There’s hope,” Bucks coach Mike Budenholzer said. “We’re not ruling him out, so I guess until he’s ruled out you have hope. He’s going to do everything he can to make himself available.”

Also Tuesday: Game 3 of the Western Conference semifinals, with that matchup between the Los Angeles Lakers and Houston Rockets tied at a game apiece.

Antetokounmpo was with the Bucks for their light practice Monday. He got treatment on the ankle, then left wearing a protective boot over his right foot — a standard practice with sprains to keep the injured area from bearing weight.

The Bucks won Game 4 without him for the most part, beating the Heat in overtime. The NBA acknowledged Monday that two fouls should have been called on the Bucks late in regulation, including one that would have put Jimmy Butler on the foul line with 24 seconds left and the Heat leading by a point. Donte DiVincenzo made a free throw on the next Milwaukee possession to force overtime.

“Our veteran players are experienced enough to know how difficult it is to win in the playoffs and how challenging it is just to win one game,” Miami coach Erik Spoelstra said. “Each game has been like that. There have been these moments of truth and for three straight games we were able to win those moments of truth.”

In Game 4, it was Milwaukee’s turn. And with or without Antetokounmpo, the Bucks still believe they can extend the series.

“Did we put ourselves in a hole? Absolutely,” Milwaukee’s Wesley Matthews said. “Are we going to be punks about it? Absolutely not.”

The Lakers knotted up their series with a 117-109 win in Game 2 on Sunday night, with LeBron James and Anthony Davis combining for 62 points and 21 rebounds on 25-for-41 shooting. Rajon Rondo giving the Lakers 10 points and nine assists in 29 minutes off the bench was another big factor.

The key, James said, was the Lakers being able to have a better feel for how fast Houston plays.

“Sometimes you need one game to be able to understand the speed that they play with,” James said. “I think that we adjusted from Game 1 to Game 2. Extremely fast team … and we got a feel for that. We understand how every possession and how much scrambling, how much running, how much pace, how physical the game is going to be versus this team. They’re very good. Extremely good, no matter who’s on the floor.”

A look at Tuesday’s game:

KEEP AN EYE ON: The Bucks’ minutes after they emptied the tanks in Game 4. Khris Middleton played a season-high 48 minutes, his most in 5 1/2 years. Brook Lopez played 42 minutes, a season high for the second consecutive game and his most in nearly four years. Eric Bledsoe logged his most minutes (40) since March 2018. George Hill also set a season high in minutes (37), going over 31 for just the second time all season. And they did all that facing elimination pressure. Can they do it again?

PRESSURE IS ON: Miami. All on Miami. The longer this goes, the more hope the Bucks will have of becoming the first team in NBA history to win a series after trailing 3-0.