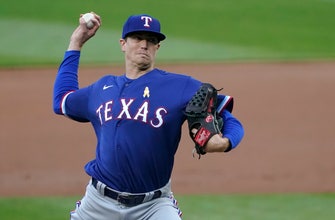 SEATTLE (AP) – Jose Marmolejos hit a tiebreaking single in the eighth inning after twice leaving the bases loaded, and the Seattle Mariners beat the Texas Rangers 5-3 on Saturday night.

It was 2-all in the eighth before Seattle scored three times off reliever Jonathan Hernandez (5-1) before making an out.

Marmolejos atoned for twice making the last out of an inning with the bases loaded. Evan White followed with another run-scoring single and Phillip Ervin added an RBI double in his first game for the Mariners.

Shin-Soo Choo had a season-high four hits for Texas, including a ninth-inning homer. The Rangers have lost four in a row and six of seven.

Seattle starter Justus Sheffield allowed two runs over seven innings. He had one of his best games of the season and looked to be in position for the win until he made his only real mistake of the night just before the very end of his outing, giving up a two-out, tying homer to Anderson Tejeda in the seventh.

Sheffield has now lasted at least six innings while allowing two runs or fewer in four of his last five starts.

Joey Gerber (1-0) pitched a scoreless eighth and Yohan Ramirez worked the ninth for his second save.

In the seventh, Rangers relief pitcher Joely Rodriguez fell to the ground after throwing a pitch to Kyle Lewis. He stayed on the ground for some time holding his left leg and needed assistance as he limped off the field. … Before the game, Texas manager Chris Woodward said pitchers Corey Kluber and Jose Leclerc, both on the injured list since July with right shoulder muscle tears, will not return this season. Danny Santana, on the 10-day IL since Aug. 27 with a right elbow strain, is also likely out for the season. … OF Willie Calhoun (left hamstring sprain) and 2B Rougned Odor (eye infection) could return at some point during the Rangers’ upcoming homestand. Woodward said Odor will not play every day when he returns to give younger players more opportunities.

Prior to the game, the Mariners claimed right-handed pitcher Casey Sadler off waivers from the Chicago Cubs, optioned outfielder Jake Fraley to the alternate training site and added Ervin to the active roster. Ervin, who was claimed off waivers from Cincinnati on Thursday, started in right field on Saturday.