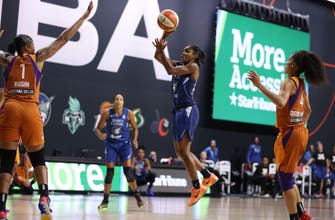 Damiris Dantas scored 13 points, making all five of her field goals, in the first half and Bridget Carleton added 12 as Minnesota led 51-42. Dantas finished with 19 points and Carleton had 14 points and a career-high six assists.

Bria Hartley led Phoenix (6-7) with 24 points and Skylar Diggins-Smith added 21. Diana Taurasi was held to 14 points on 3-of-12 shooting.

Phoenix center Brittney Griner missed her first game of the season due to personal reasons. She leads the team in points (17.7) and rebounds (7.5).