Anthony Joshua knows he could be just one win away from a fight for the ages – one the public would devour.

He has been here before. In June 2019 he said he was “looking at the big picture” as he discussed bouts with Deontay Wilder and Tyson Fury. Within 72 hours he was floored four times by Andy Ruiz Jr, the no-hope opponent who derailed his plans.

It was a “blip”, Joshua said at the time. On Saturday night against Kubrat Pulev he knows there can be no such slip-ups if hopes of two showdowns with Fury are to last into 2021.

“If he loses on Saturday, two fights and probably about £200m goes out of the window – that’s the kind of pressure that the big guys at the top have to overcome,” said boxing analyst Steve Bunce, who will form part of BBC Radio 5 Live’s ringside commentary team. 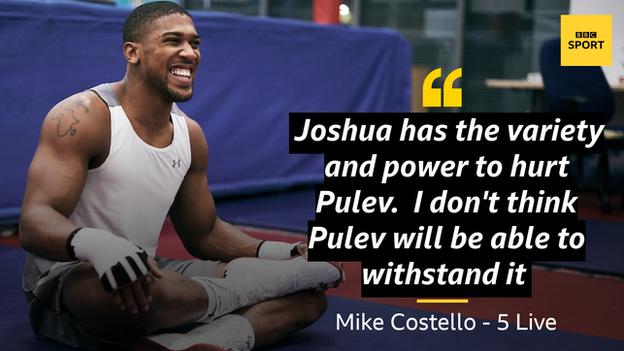 Around 1,000 fans – paying between £100 and £1,000 – will attend as Joshua risks his three world heavyweight belts in his first UK appearance in over two years. Fury – holder of the only other significant world title – turned down a ringside ticket of his own.

“I did expect him to come actually,” said promoter Eddie Hearn. “I’m sure he will be watching.”

Hearn admits he is nervous. Terms for fights with Fury are said to be loosely agreed but first his man must fight in front of a crowd a mere fraction of the size he has grown used to, after spending a week in a Covid-secure bubble – and after 12 months without a fight.

Boxing during the pandemic has proved profitable for underdogs. Vasyl Lomachenko, Dillian Whyte and Daniel Dubois are just some of the bookies’ favourites counting the cost of huge losses in recent times.

“It will show who was disciplined during lockdown,” Joshua – a 1-10 favourite – told 5 Live Boxing. “Who worked on their craft? Who improved?

“The best way I can get rid of the ring rust is to not be scared, to not have nerves, and to go in there confident in my ability.

“The pressure I went though last year was tough but made me stronger mentally. I grew a thicker skin. I want to be successful in boxing and the only way to be successful is to take on good challengers. This is just another one.”

‘It could be an awkward night’

It remains to be seen exactly how Joshua plans to approach the fight. Will he stick with the ‘hit and move’ strategy that undid Ruiz in their December rematch? Or can he blend that approach with the knockout-chasing urgency of old and ultimately prove that his loss to Ruiz was the catalyst for improvement?

But whatever strategy he pursues, some pundits warn that the champion is vulnerable – Pulev, who won major medals as an amateur, goes into the bout fuelled by patriotism and the desire to fulfil his late father Venko’s dream of having a son win the sport’s biggest prize.

Already a hero in Bulgaria, Pulev can become his country’s first world heavyweight champion – just as Ruiz became Mexico’s. And at 39, he also knows it is now or never.

Peter Fury – who as trainer guided his nephew Tyson Fury to world-title success in 2015 and watched Pulev beat his son Hughie Fury three years later – thinks Pulev is a threat to the Briton.

“You look at Pulev, a seasoned fighter all of his life, a hungry man,” he told 5 Live Boxing. “He says he’s doing it for his father and that’s a big statement. I know how I feel for my father. He’s putting it all on the line, make no mistake. He has vast experience.

“He has a very good jab, good distance judgment. Unless Joshua can break that style down, it could be an awkward night.”

An awkward night is one thing, a disastrous one is quite another.

Few sports delay their biggest fixtures quite like boxing does but in homes, pubs, offices or – more commonly in this pandemic year – online chat rooms, the Fury v Joshua debate has gone on long enough.

The fight of a generation could feel much closer on Sunday morning if there is no second blip on Saturday night.

BBC boxing correspondent Mike Costello: I think Joshua has the variety and power to hurt Pulev. He is a man so determined to make his mark during his second spell as champion. I don’t think Pulev will be able to withstand it.

BBC Radio 5 Live boxing analyst Steve Bunce: I think Joshua wins. This Joshua, in front of those 1,000 lucky souls. He is a smarter fighter. He has discovered his boxing brain.