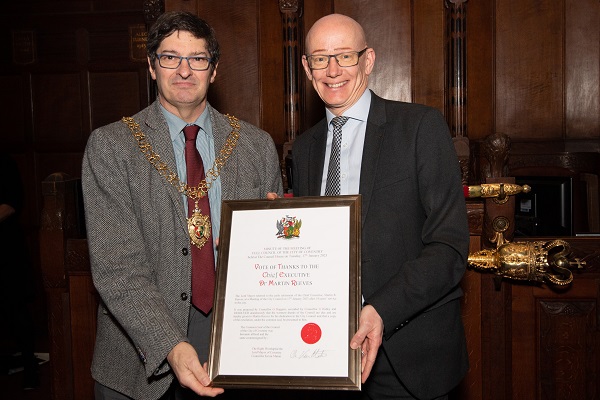 Councillors united at yesterday’s Full Council Meeting to pay tribute to Chief Executive Martin Reeves, who is due to leave his post in the coming weeks.

Martin announced recently that he had decided to take up a new post as Chief Executive at Oxfordshire County Council.

Yesterday’s Council meeting was the last one he will attend before leaving, and members passed a vote of thanks for the work he has done in the city over the past 14 years.

Cllr Duggins described Martin leaving the Council as the “end of an era” adding he had been a “fine servant of the city as well as the Council” over the last 14 years.

He said: “I think Martin has always epitomised the One Coventry approach which is quite appropriate as we move towards the revised One Coventry plan between now and the end of the decade.

“Of course, there are many, many achievements for Martin during this particular period of time – we’ve had City of Culture during Martin’s tenure and the Commonwealth Games, Children’s Games and of course the Rugby League World Cup.”

In supporting the motion, Cllr Ridley added: “When you think of some of the challenges you have seen since you have been here it is quite extraordinary.

“It is an incredible achievement to have been here for as long as you have and to have made the impact that you have made.

“You have always had the best interests of the city at heart and worked very hard. Our loss is Oxford’s gain.”

At the end of the motion, Martin was presented with a certificate by the Lord Mayor of Coventry Cllr Kevin Maton.

In the meantime his role will be delivered jointly by Barry Hastie, the Council’s Chief Operating Officer, and Kirston Nelson, our Chief Partnerships Officer. Julie Newman, Chief Legal Officer, will act as Returning Officer and Electoral Registration Officer.