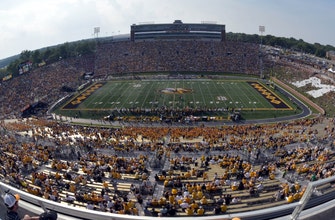 The league on Friday released two additional cross-divisional opponents in a docket shortened to 10 conference-only games with play beginning on Sept. 26. That’s three weeks later than the original opening weekend and two after several schools were scheduled to start SEC play. Dates are still to be determined.

The SEC will play 10 games over 11 weeks under the new schedule and conclude with the championship game on Dec. 19 in Atlanta after an open week. The divisional format will remain.

“We made every effort to create a schedule that is as competitive as possible and builds on the existing eight Conference games that had already been scheduled for 2020,” SEC Commissioner Greg Sankey said in a release. “This schedule is a one-year anomaly that we have developed under unique circumstances presented by the impact of COVID-19.”

One question with the new SEC schedule was whether some schools’ schedules would become tougher or lighter with additional foes. Each school lost four non-league matchups that for some were a mix of marquee challenges and perceived overmatched opponents.

LSU, looking to begin anew from a 15-0 championship season led by Heisman Trophy winner Joe Burrow, had already lost an early non-conference matchup against visiting Texas from the Big 12. For the Tigers, who must navigate a tough West Division including Alabama each season, the road initially appears to be smoother with teams that finished at the SEC East bottom last year.

Meanwhile, the Crimson Tide gained a split of sorts against the Missouri Tigers but will face a Kentucky squad seeking its fifth consecutive bowl game and third win in a row.

Finalizing the expanded schedule wrapped up a busy Friday of coronavirus-related adjustments for the SEC.

Coaches, staff and other personnel will be required to wear face coverings on the sidelines at sporting events this fall. The initial guidelines include testing requirements, procedures for infections and contact tracing and protocols for quarantine and isolation.