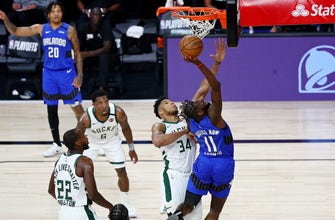 LAKE BUENA VISTA, Fla. (AP) — Nikola Vucevic scored a playoff career-high 35 points and had 14 rebounds, and the Orlando Magic stunned the top-seeded Milwaukee Bucks 122-110 on Tuesday in the playoff opener of the NBA’s pandemic-altered season.

Terrence Ross scored 18 points, Gary Clark added 15 and D.J. Augustin had 11 points and 11 assists for the eighth-seeded Magic, who took a 1-0 lead in the best-of-seven series.

Giannis Antetokounmpo finished with 31 points, 17 rebounds and seven assists for Milwaukee, but was held without a field goal over the final 11 minutes.

Milwaukee swept the season series against Orlando, winning four games by an average of 17 points, but struggled with the Magic defense, which repeatedly clogged the lane and forced Antetokounmpo to settle for jump shots.