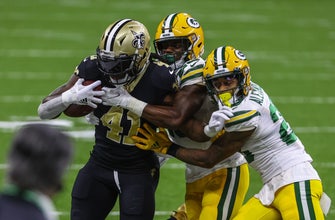 The Green Bay Packers have capitalized on the strengths of their potent offense and the circumstances of this unusual season to get an early jump on the rest of the NFC.

Now they need to get better and healthier on defense.

Green Bay (3-0) leads the NFL in points per game (40.7) and yards per play (6.9) after winning 37-30 at New Orleans on Sunday night without star receiver Davante Adams, who missed the game with an ankle injury.

The explosiveness of the Packers’ attack had quarterback Aaron Rodgers fielding questions about how this unit compares to the best offenses he’s led in a Hall of Fame-caliber career. Rodgers started out by citing 2011 and 2014, the years he was named MVP.

“But this offense is just so different,” Rodgers said. “Other than Davante, who obviously didn’t play tonight, I don’t think many teams look at us and think we have a number of stars that they’re really worried about. Obviously Aaron Jones is a such a talented guy and you try and take him away, but you never know really whose day it’s going to be.”

Thanks in part to Rodgers’ ability to draw opposing defenses offside and create free plays, the Packers have benefited as much as any team from the lack of fans at NFL stadiums amid the coronavirus pandemic.

While Rodgers says he misses playing in front of fans even in road games, he acknowledges the lack of spectators helps the offense.

“I mentioned that early in training camp, (that) I feel like it was going to be an advantage for guys like myself with who have cadence that can be rhythmic enough to draw people offside,” Rodgers said. “At the bare minimum, it definitely keeps them at bay, they’re not really able to jump the snap count. Which, for us, is all it needs to do. It’s a new world we’re living in, playing in.”

But the same old issues are facing Green Bay’s defense.

Green Bay allowed New Orleans’ Alvin Kamara to gain 58 yards on six carries and catch 13 passes for 139 yards and two touchdowns on Sunday. Packers coach Matt LaFleur said Monday the Packers had at least 13 missed tackles at New Orleans. Five of them came when Kamara caught a pass behind the line of scrimmage and turned it into a 52-yard touchdown.

That defense played a second straight game without tackle Kenny Clark because of a groin injury and lost linebacker Christian Kirksey in the first half to a shoulder injury. If Kirksey misses additional time, it could expose Green Bay at a position where it lacks depth.

The Packers’ defense has produced plenty of big plays — the turning point of Sunday’s game came when Za’Darius Smith stripped the ball away from Taysom Hill — but they’re allowing too many long gains.

The Packers have used a different combination on the offensive line in each of their three games, yet they’ve allowed only two sacks. With Adams out, Rodgers completed passes to eight players. The Packers are 5-0 in games Adams has missed since 2019.

That Kamara touchdown likely will get repeat viewings in the film room to showcase the need for improved tackling.

Rodgers has completed 67% of his passes for 887 yards with nine touchdowns and no interceptions. … Lazard caught six passes for 146 yards, including a 72-yard touchdown. … Kingsley Keke produced his first two career sacks. … After dropping a couple of passes last week, tight end Jace Sternberger rebounded by making three catches for 36 yards.

Marquez Valdes-Scantling caught one pass for 5 yards on four targets. … Rookie running back and second-round draft pick A.J. Dillon had no carries.

Kirksey’s shoulder trouble is concerning because injuries limited him to seven games in 2018 and two in 2019. … Outside linebacker Rashan Gary injured an ankle.

35/0: The Packers are the first NFL team to score at least 35 points without committing a turnover in each of their first three games, according to the Elias Sports Bureau.

The Packers hope to improve their tackling as they host the winless Atlanta Falcons in a Monday night game.