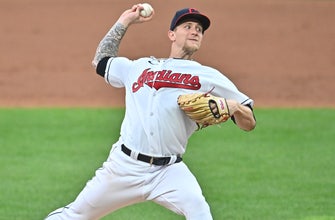 CLEVELAND (AP) — Zach Plesac’s return has been just what he wanted, and exactly what the Indians needed.

Plesac won his second straight start since returning to Cleveland’s rotation after a demotion for breaking team COVID-19 protocols, leading the Indians to a 5-2 victory over Kansas City on Monday night that extended the Royals’ losing streak to a season-high seven straight.

Plesac (3-1) gave up a hit in each of the first seven innings, including Adalberto Mondesi’s 458-foot homer in the seventh, but came up with big pitches over seven innings.

In 13 innings over two starts since coming back, Plesac has allowed just two runs and not given up a walk with 10 strikeouts.

“Two wins, that’s all you can ask for,” said Plesac, who improved to 5-0 in six career starts against Kansas City.

There’s no shortage of impressive Zach Plesac pitching stats, but which one does he find most impressive?

Plesac was being counted on by the Indians before his off-field misstep, and interim manager Sandy Alomar Jr. said the 25-year-old has come back just as focused.

Indians closer Brad Hand struck out the side in the ninth for his major league-leading 12th save in as many tries.

Tyler Naquin had two RBIs for the Indians against Brad Keller (3-2), who hung around until the seventh and had some unlucky breaks on some grounders that found holes for Cleveland.

“Probably the most frustrating outing of my life,” Keller said. “Some days baseball works that way, and the ball doesn’t bounce your way. It seems like I made pitches when I had to and it just squeaked through the infield or whatever. Just one of those days.”

The Indians are 21-2 when scoring at least three runs, a trend All-Star Francisco Lindor dismissed before the game.

Lindor got two hits and scored once, but also had a baserunning gaffe when he got called out on an appeal play in the sixth for failing to touch second.

Cleveland moved into a tie for first in the AL Central with the idle Chicago White Sox.

Kansas City made two errors and Mondesi provided the only real highlight with the longest homer of his career, a shot that cleared the lower seats in right.

Cleveland scored twice in the second off Keller, who limited the Indians just one run over 6 1/3 innings on Aug. 31.

Buckle up!@La_Mole_13 says the @Indians‘ postseason push is going to be a great ride.#OurTribe pic.twitter.com/L4M3pY4Dph

Royals manager Mike Matheny played and managed in St. Louis, where he got to know Cardinals outfielder Lou Brock. The Hall of Famer died Sunday at 81.

“I had enough time to spend with him that I consider Lou Brock a friend,” Matheny said. “How amazing of a statement is that?”

Brock’s speed made him one of baseball’s most dangerous players. He stole at least 50 bases in 12 consecutive seasons and finished with 938. He swiped 118 bases in 1974. The Royals had 117 last season.

Lindor is grateful that Major League Baseball is allowing Puerto Rican players to wear No. 21 as a tribute to Hall of Famer Roberto Clemente on Wednesday.

A 15-time All-Star, Clemente is a hero in his native country as much for his baseball achievements as humanitarian work. He died in a 1972 plane crash bringing goods to Nicaragua following an earthquake.

“He represented all of us, and now it’s our turn to represent him,” Lindor said. “His name and his legacy will never die.”

Royals: C Salvador Pérez could be back by the weekend after being sidelined with blurred vision in his left eye. Matheny said Pérez took at-bats Sunday at the team’s alternate training site.

Indians: 3B José Ramírez left in the seventh with discomfort in his left thumb. He’s been battling the issue for a few weeks. Alomar said Ramirez will be checked again Tuesday, but he’s leaning toward sitting him and playing Mike Freeman.

Sandy Alomar provides an update on Jose Ramirez’s status and explains the decision to remove him from the game.#OurTribe pic.twitter.com/nHskuXszuW