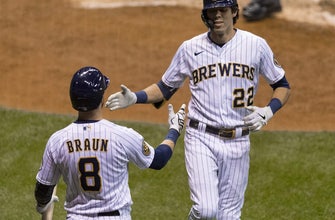 The Los Angeles Dodgers have checked nearly every box on the way to their eighth straight postseason appearance.

Now if they could just do something about that 32-year championship drought.

With Mookie Betts in the fold, the Dodgers are poised for a new challenge in the postseason, starting with Game 1 on Wednesday in their best-of-three playoff series against the Milwaukee Brewers.

Betts was as good as advertised in his first season in Los Angeles, hitting 16 homers at the top of the order. He led the team in stolen bases with 10.

“With Mookie at the top kind of setting that tone, it just has that trickle down effect,” third baseman Justin Turner said. “Our entire order takes pride in grinding out at-bats and making guys work. We have a lot of guys that can hurt you with one swing.”

The eighth-seeded Brewers take on the Dodgers in the wild-card round, having advanced to their third straight postseason appearance for the first time in franchise history.

Milwaukee reached the 2018 NL Championship Series, losing to the Dodgers in seven games. It’s the only other time the teams have met in the postseason. They haven’t faced each other since the 2019 season.

The Dodgers lost back-to-back World Series appearances in 2017 and 2018; they were eliminated in five games by Washington in last year’s NL Division Series.

As good as the Dodgers have been, the Brewers never moved above .500 all season and finished with a losing mark of 29-31, getting into the postseason thanks to holding a tiebreaker over the San Francisco Giants.

“It kind of fell in our lap,” Brewers infielder Jedd Gyorko said. “We really have nothing to lose and that makes us pretty dangerous.”

Roberts believes the Dodgers can overcome whatever the Brewers throw at them.

“You got to expect anything — the gamesmanship, getting the lineup late or throwing a pitcher for a hitter or going to the ’pen,” he said. “We can sort of combat anything.”

The Dodgers will start right-hander Walker Buehler in Game 1 on Wednesday night. He has battled a blister that sent him to the injured list twice in the last month. He reached out to consult former teammate Rich Hill, who dealt with blisters several times as a Dodger pitcher.

Milwaukee counters with left-hander Brent Suter, although the Brewers could go quickly to their bullpen to get to hard-throwing Devin Williams and Josh Hader. Suter’s season high is 59 pitches in his first full year back following Tommy John surgery.

“We’re going to need contributions from relievers beyond those two guys,” Brewers manager Craig Counsell. “That’s absolutely important. Eight innings is out of the question for Brent.”

The shortened season has been a rough go for some big hitters. Reigning NL MVP Cody Bellinger of the Dodgers is hitting .239 with a .788 OPS. Milwaukee’s Christian Yelich is batting .205 with a .786 OPS. That’s a far cry from the numbers that made them some of the NL’s best hitters the last two years.

“You kind of throw out the stat sheet once you get to the postseason and understand he’s still a superstar player,” Roberts said of Yelich. The Brew Crew overall had an average of .223, worst in team history.

Besides Bellinger, the Dodgers’ other key left-handed hitters — Max Muncy and Joc Pederson — have struggled. Muncy batted .192 and Pederson hit .190, so they’ll all be looking to bust out during the postseason. Their collective slump was covered by the performance of Betts, Corey Seager’s return to form and Will Smith’s offensive emergence. Smith is hitting .348 this month, with 12 runs, 14 RBIs and an OPS of 1.048. Turner was limited to 10 games this month because of a strained hamstring, but the third baseman known for his breakout postseason performances still hit .394.

The Brewers took a major hit when Corbin Burnes went on the injured list last week with an oblique injury that will keep him out of this series. He was one of the NL’s top starters with a 4-1 record and 2.11 ERA. Burnes’ absence puts extra pressure on Brandon Woodruff, who was 3-5 with a 3.05 ERA and will start Game 2. He came up big last weekend with 10 strikeouts over eight shutout innings in a must-win game.

Former Dodgers pitcher Brett Anderson is dealing with a blister that forced him out of the final game of the season. Counsell offered no update on Anderson’s status Tuesday. Milwaukee’s other starters — Josh Lindblom and Adrian Houser — both have ERAs over 5.00.

Don’t forget, though, the Brewers forced the Dodgers to seven games in the NLCS two years ago by cobbling together innings from multiple pitchers.

“Our pitchers’ mission still is to just get on the attack and go after them,” Counsell said. “Walks get you in trouble with lineups like this.”

Series Summary: The Brewers are making their third straight playoff appearance, something they’d never accomplished before since the franchise launched as the Seattle Pilots in 1969. … This series is a rematch of the 2018 NLCS won by the Dodgers in seven games, the only other time these clubs have met in the postseason. … Milwaukee lost to the eventual World Series champion Washington Nationals in a wild-card game last year. … The Brewers and Houston Astros, who also went 29-31, are the first playoff teams to finish a regular season below .500 since the 1981 Kansas City Royals went 50-53 but won the AL West’s second-half title during the split-season format that year. If the 1981 strike season isn’t taken into account, the team with the lowest winning percentage to qualify for the playoffs before this year was the 2005 San Diego Padres at 82-80. … The Brewers haven’t had a winning record all season. They were at .500 on eight occasions but never got above the mark. … Milwaukee lost its top starter when Corbin Burnes (4-1, 2.11 ERA) strained his left oblique Thursday and went on the injured list. … The Brewers scored just 4.1 runs per game and ranked 26th in the majors in batting average (.223). They struck out 582 times for MLB’s second-highest total, behind only the AL East champion Rays. … Yelich, the 2018 NL MVP and NL batting champion in 2018 and 2019, slumped badly this year but walked 46 times to rank second in the NL.

Series Summary: The Dodgers won their eighth straight NL West title with baseball’s best record but are still looking for their first World Series championship since 1988. They made back-to-back World Series appearances in 2017 (lost to Houston in seven games) and 2018 (lost to Boston with Betts on the Red Sox roster). They won a franchise-record 106 games last year and didn’t make it out of the Division Series. … The Dodgers were in first place for much of the shortened season and pulled away from the upstart Padres to win the division by six games. Bellinger, the reigning NL MVP, Max Muncy (.192) and Joc Pederson (.190) will be looking to bust out of their season-long slumps, although the offense has received an unexpected boost from Pollock, Smith and Chris Taylor (.270). Turner’s exploits in October have made him one of the franchise’s greatest postseason performers, but he’s been hobbled of late. He was on the injured list with a strained hamstring in September and tweaked his thumb on the last weekend of the season. … One of the Dodgers’ biggest weapons is their depth. They move players in and out of multiple positions frequently — Betts even started at second base. Roberts has so many options at his disposal that even someone who has a breakout game could be sat down in favor of someone else. Keep an eye on Kershaw, considered by many the greatest pitcher of his generation — but he often struggles in the playoffs. He’s 9-11 with a 4.43 ERA in the postseason and lost his lone start in last year’s NLDS. The three-time Cy Young Award winner can’t afford a letdown in the short wild-card round.