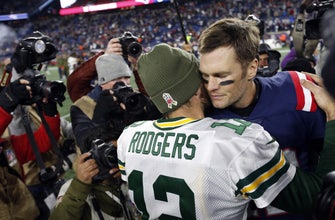 TAMPA, Fla. — Tom Brady has a score to settle with Aaron Rodgers, and it’s got nothing to do with the Tampa Bay Buccaneers and Green Bay Packers.

The Super Bowl-winning quarterbacks meet for just the third time in their long careers Sunday, with Rodgers’ Packers (4-0) trying to remain unbeaten and Brady’s Bucs (3-2) eager to see how they measure up with one of the NFL’s top teams.

The stars understand they’re the focal point of the matchup, but reject the notion it’ll be Brady vs. Rodgers.

“When you play against another great quarterback, you always know those are the tough teams to beat because they’re prepared, they’re going to play well on offense, they’ve got a very talented defense. It just means you can’t make a lot of mistakes,” Brady said.

“I’m not defending Aaron. We’ve got a whole defense that’s doing that. But from my standpoint, what does that mean? I can play a role in that by doing our job on offense, so that a guy like that doesn’t have his offense on the field trying to score points,” Brady added. “You just can’t give guys like that extra opportunities because they make you pay.”

Rodgers, who has thrown for 13 touchdowns and zero interceptions through four games, struck a similar tone.

“He’s obviously done it at the highest of levels for so long. He’s been an icon at the position. He’s been somebody that we’ve all looked up to for so many years as the standard of excellence,” Rodgers added. “I think there’s a ton of admiration and respect for the way that he’s played the game from so many of us, especially us guys who’ve been in the same era … and gotten to compete with him.”

Speaking of competition, Brady’s good-natured beef with his Green Bay counterpart actually stems from some time they spent together a few years ago in Los Angeles.

Among other things they talked about how eating healthy and taking care of the body could extend playing careers and improve overall quality of life.

“He made a putt at the end to win, so I was a little (ticked) about that,” Brady recalled. “I always enjoy my time around him. Still trying to get him back on the golf course, though.”

Brady has followed the Green Bay quarterback’s career ever since Rodgers was in college at Cal.

“He’s just been a great player. What’s not to like about his game? When you’re a quarterback, I think there’s always mutual admiration because you appreciate: ‘Man, it’s a tough job,’” Brady said.

It’s only the third time Brady and Rodgers have faced each other as starting quarterbacks. They split their two meetings during Brady’s New England tenure, with the Packers winning 26-21 in 2014 at Green Bay and the Patriots winning 31-17 in 2018 at New England.

This game features two of the NFL’s most prolific touchdown receivers.

Evans and Tonyan have helped their teams withstand the absences of key wideouts.

Tampa Bay ranks fourth in the league with 17 sacks. Green Bay has allowed a league-low three sacks this season.

The Bucs led the league in rushing defense a year ago and are ranked No. 1 again through five weeks. They’ve held their past three opponents to fewer than 50 yards on the ground. If they do it again Sunday, they’ll become the first team since the 2016 Packers with a string of four consecutive games holding the opposition below 50.

STREAKS, STATS AND NOTES — The Packers have won their last nine regular-season games. They also had an NFC divisional playoff victory over Seattle before losing in the NFC championship game at San Francisco last season. … The Packers are off to their fastest start since 2015, when they won their first six games before finishing 10-6 and losing to Arizona in the NFC divisional playoffs. … The Packers are the first team in NFL history to score at least 150 points and commit no turnovers through the first four games of a season. They also have scored at least 30 points in each of their first four games without turning over the ball. The only team with a longer streak of consecutive games with 30-plus points and no turnovers is the 2010 New England Patriots, who did that in seven straight games and had current Buccaneers QB Tom Brady. … Green Bay leads the NFL in yards per play (6.83) and time of possession (34:20). … Buccaneers QB Tom Brady has thrown 10 TD passes vs. three interceptions in five career starts against Green Bay. … Tampa Bay has outscored opponents 48-14 in the first quarter through five games. … TE Rob Gronkowski has yet to score his first touchdown for the Bucs. He and Brady teamed on 78 regular-season TDs with New England — one shy of matching Dan Marino and Mark Clayton for fourth most for a quarterback/receiver tandem in NFL history. … WR Mike Evans is tied for the league lead with six TD receptions. … Tampa Bay’s defense is ranked No. 1 against the run, No. 2 overall. The unit has held opponents to less than 50 yards rushing the past three weeks. The 2016 Packers were the last team to do that in four consecutive games. … With RBs Leonard Fournette and LeSean McCoy slowed by injuries, Ronald Jones has topped 100 yards rushing the past two games. … Fantasy tip: Tampa Bay’s receiving corps is banged-up, though Chris Godwin (hamstring) returned to practice on a limited basis this week. Scotty Miller (hip/groin) was also limited early in the week after not being targeted at all during last week’s loss to the Bears. Evans (ankle) has been less than 100 percent the past two weeks, yet is the only player in the league who’s scored in each of his team’s games.