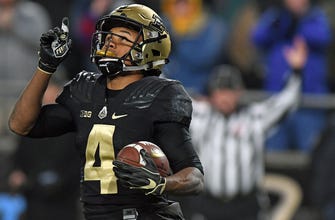 Purdue All-America receiver Rondale Moore is opting back in to the 2020 football season.

Moore announced in early August that he was opting out and would concentrate on preparing for the NFL draft. His decision came before the Big Ten postponed its fall football season, but there was speculation at that time the conference could be heading into that direction because of concerns about playing through the pandemic.

The Big Ten announced last week that it would stage a fall football season, starting the weekend of Oct. 24. The Big Ten has pledged to daily COVID-19 testing for its athletes.

Moore, a possible first-round draft pick who missed much of last season due to a knee injury, decided to rejoin the Boilermakers for his junior year. As a freshman, Moore had 114 catches for 1,258 yards and 12 touchdowns. He also ran for 213 yards and two scores. Last year he was limited to just four games.