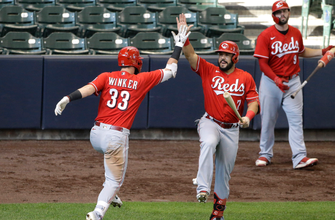 MILWAUKEE (AP) — Wade Miley allowed one hit over four scoreless innings to help the Cincinnati Reds to a 6-0 victory and doubleheader sweep of the Milwaukee Brewers on Thursday night, one day after both teams opted not to play to protest racial injustice.

The reactions by the teams followed the weekend shooting by police of Jacob Blake, a Black man, in Kenosha, Wisconsin, about 40 miles south of Milwaukee. Other major league teams have since followed, with seven games postponed Thursday.

Miley, making his third start after a stint on the injured list, allowed only a leadoff single in the third, striking out three and walking one, with a hit batter.

“That’s probably the best stuff I’ve had, as far as shape of pitches, cutter, change-up,” Miley said. “I felt really good early on. I was able to get the cutter up and in on guys’ hands. I was getting the swings that I kind of got accustomed to over the past couple years, really for the first time.”

Miley, 14-6 with Houston last season, entered with a 9.72 ERA. He had lasted just 1 2/3 innings in each of his first two starts, sandwich around time on the IL. He went five innings his last time out, allowing three earned runs.

Lucas Sims (2-0) walked two in two scoreless innings for the victory and Raisel Iglesias completed the one-hitter with a perfect ninth.

The Reds combined two singles and Kyle Farmer’s double and a hit batter for two runs in the second off starter Josh Lindblom (1-2).

“Just a frustrating day of baseball,” Lindblom said. “It wasn’t very much fun. The way the series started, we played two really, really good games. To come out today and split the series, that was tough.”

Nick Castellanos and Jesse Winker, who combined for three homers, six hits and five RBIs in the 6-1 victory in the opener, had consecutive RBI doubles in the fifth inning off Freddy Peralta to put the Reds up 4-0.

Eugenio Suarez made it 6-0 with his sixth homer, a two-run shot off Justin Grimm in the seventh.

“For out team it’s big to win two games, well-played games, well-pitched games,” said Reds manger David Bell. “Our starters were outstanding, and the bullpen came in and did a good job. When can you get through a doubleheader with two wins against a good team after a tough road trip, it’s really important.”

“It’s been a long couple of days for us,” said Reds starter Sonny Gray. “It’s been a bit of a long 48 hours, 24 hours, but we wanted to come out and play a good baseball game and walk away with the win.”

Winker had a two-run shot in the fifth, his eighth, to put the Reds up 5-0 and a solo shot in the third.

Gray (5-1) allowed four singles over five scoreless innings, striking out four and walking two. Gray escaped a bases-loaded jam in the second, getting Eric Sogard on an inning-ending liner to right.

“The second inning was a little bit frustrating for me, but at the end of the day, I walked away,” Gray said. “I feel like I made my pitches in that inning and fortunately came away with a zero after the bases were loaded.”

Omar Narvaez accounted for Milwaukee’s run with a solo homer, his second, in the sixth off Nate Jones.

The 22-year-old Garcia, called up Wednesday, singled with two outs in the second on a slow roller that hit the bag at third, sending Freddy Galvis to second. Curt Casali followed with an RBI single to left to put the Reds up 1-0.

Castellanos opened the third inning with his 10th homer. Winker followed a drive to left for his seventh homer to make it 3-0.

“We’ve got guys in the lineup who have had success in this league,” Brewers manager Craig Counsell said. It has not been a successful first half for a lot of our lineup, most of our lineup. It’s got to be better.”

Brewers center fielder Lorenzo Cain, who opted out of the remainder of the season after playing in five games, said a large part of his decision was based on his faith.

“The reason I opted out was, of course, for COVID reasons, but this lifestyle and everything that’s going on in 2020 has definitely opened my eyes so I felt the need to opt out not only for the COVID reasons, but also trying to get my life right with God,” Cain said.

“This year has been crazy,” he added. “It’s been a tough year. I’m definitely at a loss for words with all the things going on right now. It’s just tough. The way things are going, it’s tough to see, it’s tough to deal with. We always want things to just get better.”

Brewers: C Manny Pina left in the second after being injured in an attempted pickoff play. Pina walked with two out in the first, then jammed his knee on the bag on the pickoff attempt by Reds starter Wade Miley, who was called for a balk on the play. Pina left the game and was replaced by Omar Narvaez, who caught the first game. Pina was on crutches after the game. “We’re going to have some more testing done tomorrow,” Counsell said.

Shogo Akiiyma, who walked with one out in the fifth, was thrown out at home while trying to score from first on Nick Castellanos’ drive double to center field. The Reds challenged and the call was overturned, putting the Reds up 3-0.

Reds: Cincinnati moved up LHP Wade Miley for the second game of the doubleheader, and RHP Tyler Mahle (0-1, 4.41 ERA) is expected to open the series Friday night in Chicago against the Cubs.

Brewers: RHP Corbin Burnes (0-0 3.42) makes his seventh appearance and fourth start to open the four-game series Friday against Pittsburgh at Miller Park. Burnes is looking to regain his 2018 rookie form when he went 7-0 with 2.61 ERA in 30 relief appearances.