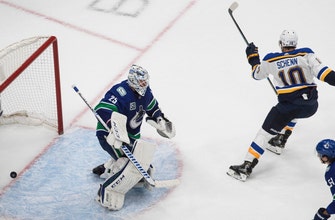 EDMONTON, Alberta — Brayden Schenn scored 15:06 into overtime to give the St. Louis Blues a 3-2 win over the Vancouver Canucks on Sunday night.

Schenn, circling in the neutral zone, took a stretch pass, raced in and fired a shot high past Vancouver goalie Jacob Markstrom for the defending champion Blues’ first win this postseason.

Elias Pettersson and J.T. Miller scored for the Canucks, and Markstrom finished with 46 saves.

All the scoring in regulation play came in the second period, starting on the power play when Pettersson hit Miller with a tape-to-tape stretch pass with Miller in full flight at the Blues blue line. Miller streaked in and snapped a shot high glove side on Allen for a 1-0 lead at 1:19.

The Blues tied it nearly seven minutes later when Faulk jumped into the slot, took a seam pass from Robert Thomas and ripped the puck past Markstrom.

Perron gave the Blues their first lead of the series, taking a dish pass from Ryan O’Reilly and delivering a sharp angle shot over Markstrom’s shoulder with 1:58 left in the period.

Vancouver replied just 37 seconds later when St. Louis defensemen Colton Parayko and Marco Scandella got tangled up with the puck in the high slot. Pettersson jumped in and fired a quick shot short-side under the bar on Allen.

It was Allen’s first appearance in the series, replacing Jordan Binnington, the hero of the 2019 Cup run.

Binnington has struggled since the season restarted, fighting rebounds while letting in nine goals in the first two games (.809 save percentage) against the Canucks.

Allen saw limited action in the regular season but compiled a 12-6-3 record and a .927 save percentage. The 30-year-old stopped 37 of 38 shots against Dallas in his lone appearance in the round robin.

St. Louis was the Western Conference leader (42-29-10) when the NHL halted, and eventually ended, the regular season on March 12 due to COVID-19. The Blues lost all three games in the round robin, dropping to the fourth seed and lost the first two games against the Canucks.

The Canucks were 36-27-6, good for 18th in the NHL, when play was suspended. They defeated the Minnesota Wild in four games in the qualifying round.

Brayden Schenn on finding himself left alone and in position for the breakaway: “The puck was in our end and happened to pop right to me, so I’ll take those bounces any day.” #stlblues pic.twitter.com/oLWKvfR94x

NOTES: For Vancouver, D Jordie Benn entered the lineup for Tyler Myers. Myers fell awkwardly into the boards on a hit from Schenn late in Game 2. … The Blues were without F Vladimir Tarasenko. The Russian sniper played in the first two games but did not dress for Game 3. The NHL is not releasing injury information.