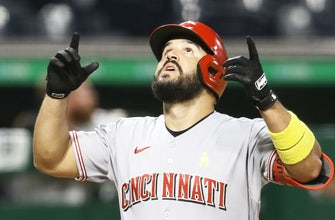 PITTSBURGH (AP) — Eugenio Suárez hit three homers in a game for the first time in his career, driving in five runs and leading the Cincinnati Reds over the Pittsburgh Pirates 6-2 Saturday night.

Suárez hit a three-run shot deep down the left-field line to cap a four-run third inning. He added solo homers in the sixth and eighth innings, giving him 12 this season — he hit 49 last year.

This marked the third baseman’s ninth career multihomer game and gave him six home runs and 16 RBIs in his last 12 games.

“We’ve seen what (Suarez) is capable of when he gets going and he gets hold of some balls,” Reds manager David Bell said. “We’ve seen him get locked in like that before and it’s fun to watch. It’d be great if he kept it going.”

Tucker Barnhart led off the Reds’ third by lining a home run to the shrubbery beyond the center-field fence. Pirates center fielder Anthony Alford broke his right elbow when he slammed into the wall chasing the ball. Claimed off waivers from the Toronto Blue Jays last month, Alford will most likely miss the last three weeks of the season.

“Honestly, it makes me feel a little sick to my stomach just because of the opportunity he has right now, but even more so knowing the person and the kid,” Pirates manager Derek Shelton said. “Just to see the pain and anguish in his eyes, it’s difficult.”

Garrett relieved Michael Lorenzen in the sixth inning with two outs, the bases loaded and the Reds holding a 5-2 lead. He struck out Adam Frazier swinging on a full-count fastball.

Trevor Williams (1-6), was tagged for three of the homers and lost his third straight decision. He allowed five runs and five hits in six innings while striking out six and walking three.

“It’s just one of those things you have to tip your hat to a guy,” Williams said of Suarez. “Unfortunately, the first one he hit was a three-run homer and it’s crooked numbers you can’t really defend. You’re swimming uphill after that.”

Pittsburgh leadoff batter Erik Gonzalez had three hits and a walk. Jacob Stallings homered in the fourth inning to draw the Pirates within 4-2.

Cincinnati starter Anthony DeSclafani was pulled after issuing a leadoff walk in the fifth. He gave up two runs and six hits.

The Reds managed just six hits but four of them left the park as they won for the third time in four games. Pittsburgh lost for the fifth time in seven games.

The Reds’ Jesse Winker broke his bat when he slammed it on home plate after striking out to end the third inning.

When the Pirates’ Gregory Polanco went down swinging for the third out in the fifth, he slammed his batting helmet off the dirt area around home plate. The echo could be heard throughout the empty ballpark.

Pirates: RHP Mitch Keller (strained left oblique) will throw live batting practice for the second time next week then progress to a simulated game. … Alford is 4 for 16 (.250) with a triple and home run in five games for Pittsburgh.

Reds: Rookie RHP Tejay Antone (0-1, 2.66 ERA) will make the third start and eighth appearance of his career Sunday in the finale of the four-game series.