Manchester City would be willing to use Spanish defenders Eric Garcia, 19, and Angelino, 23, as makeweights in a deal for Messi, if they cannot sign him on a free transfer. (Manchester Evening News)

Real Madrid are set to demand more than 20m euros for 23-year-old Spanish left-back Sergio Reguilon, who has attracted interest from Manchester United, Tottenham, Juventus and Inter Milan while on loan at Sevilla. (Marca)

Chelsea are putting the finishing touches to a £90m move for 21-year-old Germany and Bayer Leverkusen forward Kai Havertz. (Guardian)

Former Sweden striker Zlatan Ibrahimovic, 38, has agreed a new one-year contract at AC Milan believed to be worth about £6m. (Sky Sports Italia – in Italian)

Portugal forward Cristiano Ronaldo, 35, has settled any speculation about his future by saying he is preparing for a third season with Juventus. (Mundo Deportivo – in Spanish)

The arrival of 28-year-old Republic of Ireland full-back Matt Doherty at Tottenham from Wolves would pave the way for Ivory Coast defender Serge Aurier, 27, to leave. (Standard)

Manchester United have made an approach to sign Brescia midfielder Sandro Tonali, 20, who is regarded as one of the best young prospects in Italy. (Corriere dello Sport via Metro)

Newcastle have joined the list of Premier League sides interested in a move for 20-year-old Liverpool striker Rhian Brewster. (Chronicle)

Watford captain and striker Troy Deeney, 32, has been offered to West Brom. (Mail) 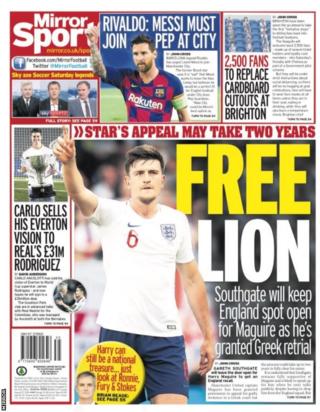