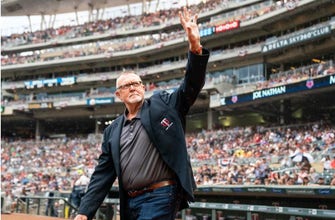 Minneapolis — The Minnesota Twins on Wednesday announced that National Baseball Hall of Fame member Bert Blyleven will transition from the broadcast booth into a special assistant position within the organization. Blyleven’s duties will include engaging with fans and partners by making special appearances on behalf of the organization throughout the year. In addition, Blyleven will continue to serve as an on-field instructor for the Twins during spring training.

Wednesday night’s Twins vs. Chicago White Sox game will mark Bert’s final game in the booth; both the Twins and FOX Sports North are proud to commemorate Blyleven’s 25 seasons as a broadcaster – an unmatched tenure among Twins analysts, television or radio.

“It is not often you can bring a Hall of Famer and a World Series champion into your broadcast booth, much less one who possesses that enviable combination of knowledge and charisma to keep fans hooked for more than two decades; the Twins did just that with Bert Blyleven,” said club President & CEO Dave St. Peter. “While his on-field contributions for the club are well-documented, we are truly grateful for Bert’s 25 years of introducing new Twins fans to the game through his stories, insight and analysis on our television broadcasts. He is a great ambassador for baseball, and we look forward to his continued role with the Minnesota Twins. Bert, you are hereby circled!”

Blyleven’s tenure as a full-time analyst began in 1996 on the Midwest Sports Channel. His broadcast partners included Tommy John, Ryan Lefebvre and current Twins play-by-play broadcaster Dick Bremer. Since 2006, Blyleven’s work in the broadcast booth contributed to 10 distinct Emmy Awards presented to FSN. Beyond offering the insights gleaned from a 22-year major league career, Blyleven’s broadcast tenure will also be forever remembered by Twins fans for the “Circle Me Bert” phenomenon that started in 2002. The simple salutation from the analyst became a staple of Twins broadcasts and, subsequently, a vehicle to raise funds toward developing a cure for Parkinson’s disease, along with other charitable donations.

“It’s amazing to think about how many families have sat down together to watch a Twins game on TV and listened to ‘Dick and Bert’ over the past 25 years,” said FOX Sports North Senior Vice President and General Manager Mike Dimond. “Bert has been a constant and familiar voice in so many homes across Twins Territory. He has educated fans, served as a cherished storyteller, shared emotion during unforgettable moments and connected with viewers with his one-of-a-kind personality. We are forever grateful for all of the television memories he has provided us.”

After breaking into the big leagues at the age of 19, Blyleven would go on to pitch 11 of his 22 major-league seasons with the Twins (1970-76 and 1985-88). His knee-buckling curveball, competitive drive and his knack for being the clubhouse prankster are only a few reasons why Blyleven had a successful career. Blyleven was named the 1970 American League Rookie Pitcher of the Year, earned 1989 AL Comeback Player of the Year honors and was selected to the AL All-Star Team in 1973 and 1985. He finished his Twins career with a record of 149-138 and a 3.28 ERA. His 2,035 strikeouts are the most in Twins history, while his 149 wins rank second. The winner of two World Series Championships (1979 with Pittsburgh and 1987 with Minnesota), Blyleven ranks fifth on Major League Baseball’s all-time strikeouts list with 3,701. He is also one of just three pitchers in major-league history to win a game before his 20th birthday and after his 40th birthday, while he finished his career with a lifetime record of 287-250 and 242 complete games (in 685 starts). While pitching for the Texas Rangers on September 22, 1977, Blyleven tossed a no-hitter in a 6-0 victory over the Angels at Anaheim Stadium.

Blyleven’s number 28 was formally retired July 16, 2011, becoming the first Twins pitcher to receive the honor. Bert was selected to the Twins 40th Season Anniversary All-Time Team in 2000, was inducted into the Twins Hall of Fame in 2002, was selected to the All-Metrodome Team in 2009 and named one of the “50 Greatest Twins” in 2010. Blyleven was inducted into the National Baseball Hall of Fame in Cooperstown, NY on July 24, 2011, becoming the first Hall of Famer born in the Netherlands.

Bert and his wife, Gayle, reside in Fort Myers, FL and have six children and eight grandchildren. They are involved in helping raise funds for Parkinson’s Association and other charitable organizations.