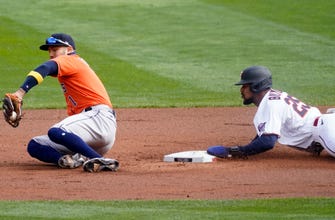 MINNEAPOLIS — The Minnesota Twins held center fielder Byron Buxton out of their lineup Wednesday for the elimination game against Houston for unspecified health reasons, five days after he was hit in the head by a pitch.

Buxton experienced mild concussion symptoms after the beaning forced him out of Minnesota’s game Friday. He was sidelined for the last two regular-season games, but he was cleared to return Tuesday for Game 1 of the best-of-three AL wild-card series. Buxton went 1 for 4 with a stolen base on a head-first slide into second. He struck out three times and had an outfield assist in the 4-1 loss to the Astros.

Twins manager Rocco Baldelli declined to confirm Buxton was out because of the concussion or divulge any details on his health, other than to describe his condition as “not 100%.” Baldelli left open the possibility of Buxton feeling well enough in the afternoon to enter the game off the bench.

Astros manager Dusty Baker named José Urquidy as the starting pitcher for Game 2. José Berríos was set to take the mound for the Twins.