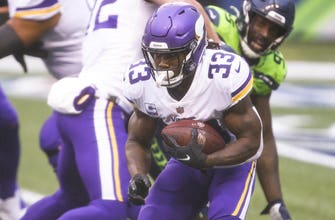 EAGAN, Minn.  — NFL leading rusher Dalvin Cook will sit out Minnesota’s game on Sunday against Atlanta because of a groin injury, giving Alexander Mattison the opportunity for his first career start at running back.

The Vikings have their bye scheduled for next week, so Cook’s absence was likely after getting hurt in the second half last week at Seattle. Mattison rushed for a career-high 112 yards in relief.

Samia has started the last four games for Pat Elflein, who is on injured reserve with a thumb injury. His absence will likely pave the way for second-round draft pick Ezra Cleveland to make his debut in the lineup on Sunday.