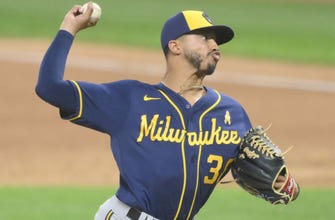 The Milwaukee Brewers will head into a best-of-three series against the Los Angeles Dodgers without their two candidates to win the Cy Young award and Reliever of the Year award.

Corbin Burnes is on the 10-day injured list with a strained left oblique. But the biggest surprise on Milwaukee’s 28-man roster for the wild-card round was the exclusion of reliever Devin Williams, who will miss the series with a reported arm injury.

The Brewers have 12 pitchers and 14 position players listed on their roster.

Game 1 between Milwaukee and Los Angeles is set for Wednesday night at 9 p.m. Tune in to FOX Sports Wisconsin at 8 p.m. for a one-hour pregame edition of Brewers Live.